Over the course of the pandemic, leading organizations have recognized that people need and want to work in new ways. Microsoft research reports 41% of global workers are considering leaving their jobs this year, which is fueling conversations about how to create a new hybrid work experience that meets employee needs as well as those of their teams and the organization.

The #1 reason for increasing remote work policies is to give employees more flexibility.

The #1 driver of long-term change is to support people’s emotional wellbeing.

But there is no off-the-shelf solution to finding this new equilibrium that gives people more control over their day, brings people together to build belonging and a sense of purpose, and meets business objectives. And the stakes are high. Make the wrong balance of choices and employees may leave in search of a better fit.

So, what are organizations doing? Why are some moving forward while others wait? And what’s giving some leaders confidence to make decisions amid uncertainty? New spring 2021 Steelcase research asked decision-makers in eight countries¹ to give us a pulse check on what’s happening.

Many study participants confirmed that the pandemic accelerated the pace of change. “This is nothing we ever would have talked about in the absence of COVID. We would probably talk about it 10 years from now after everyone else had already done it,” said one study respondent.

Greater Employee Flexibility
Leaders and decision-makers everywhere, especially in Japan, Germany, the UK, and the US, expect to offer more hybrid work policies in the future than prior to COVID-19. 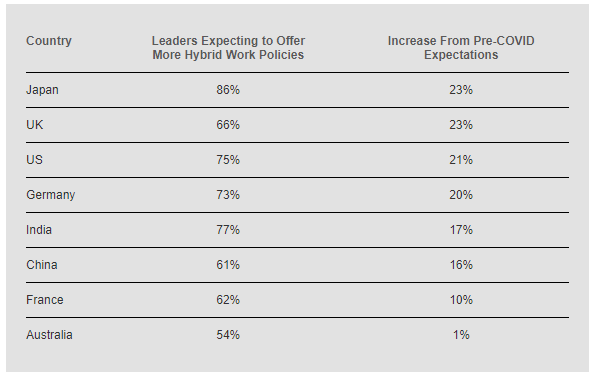 While more formal hybrid work policies would allow organizations more confidence when making choices and investments in the workplace, right now, most leaders expect to allow employees to choose their in-office days².

Increase in Real Estate
Despite shifts to work policies, decision-makers in every country, especially China, expect real estate to increase by the end of 2022. Research suggests this is due to plans for company growth.

Interestingly, the number of remote work companies plan to offer does not influence their real estate expectations. Companies that expect higher levels of remote work (Work From Home Heavy and In-Office Light) also expect to increase their square footage before the end of 2022.

WHY SOME ORGANIZATIONS MOVE FASTER

While many organizations are planning for change, some are moving more quickly and with more confidence than others. Eighty-one percent plan to start implementing their new workspace strategy in 2021. Yet, only 38% are extremely confident in their workspace strategy.

Research shows organizations emerging from COVID with faster, more holistic decision-making capabilities are doing so because they already have a strong alliance between human resources, information technology, and facilities management.

“It’s clear that we need to attract people back to the office… and it is also clear we are trying to optimize that with as little cost as possible.”

New work. New spaces.
While globally organizations are approaching if they assign workstations in different ways, large US organizations (10,000+ employees) are overwhelmingly planning changes to provide for more flexibility and collaboration. Eighty-nine percent are shifting to more unassigned workstations (also true in Germany at 55%), and 67% will add more space for collaboration.

Research suggests leaders realize the workplace is an important catalyst to facilitate connections between colleagues (in-person and remote) and between individuals and the organization. Decision-makers around the world expect certain areas of the workplace will increase in importance including:

And even while accounting for a more fluid future, organizations planning to increase flexibility for employees post-COVID expect team and individual work to still be supported by the office. 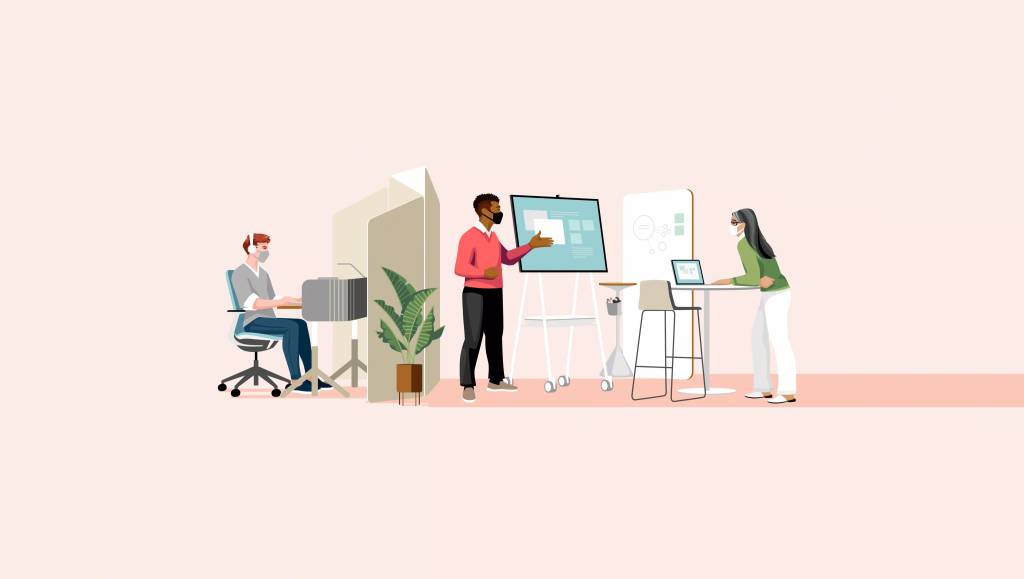 To build decision-making confidence, organizations are also looking for ways to incorporate the employee’s voice. As behavior patterns continue to evolve, decision-makers are relying more heavily on measurements — monitoring use patterns and ultimately how fluid the environment is to accommodate fluctuating employee populations. In fact, 90% expect to measure the utilization of their workspaces.

“Data is hugely important to us. We can tell down to the neighborhood… We really are sizing that and then designing that toward the needs of each group.”

Prioritizing Prototypes
The future office will be much more planned. People will be making intentional decisions around what they will be doing — where, when, and how often. To minimize risk in their investments and accelerate decision-making, many organizations are conducting pilots or behavioral prototypes.

In the US, France, Germany, China, and India, companies that expect to run significant pilots are also much more likely to measure the utilization of their spaces as well.

Finding the right hybrid solution will be an evolving process for most organizations, and it’s important to set expectations that it will need to be refined over time. But by bringing together HR, IT, and facilities, listening to employees, measuring new behaviors, and experimenting with prototypes, organizations are able to take steps forward, rev their competitive engines, and move toward a better work experience for their people and teams.